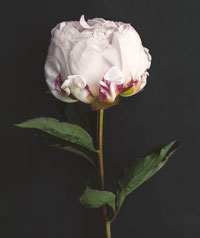 EN Our sense of smell is actually a complex system designed to detect thousands of chemicals. It helps warn of us of danger, e.g. rotting food — we can sense one component of rotten meat, ethyl mercaptan, at a concentration of 1/400,000,000th of a milligram per litre of air. Smell also helps us distinguish types of foods and flowers. The sense of smell is actually responsible for most of the different ‘tastes’ of foods. In many animals, this sense is even more important than in humans — it helps bees find nectar, for example.

The nose contains millions of receptors, of 500–1000 different types. They are in the yellow olfactory epithelium, that covers about 2.5 cm2 on each side of the inner nose. The different types of receptors are proteins folded so a particularly shaped odour molecule can dock. Each receptor is coupled to a g-protein. When the odour molecule docks, the g-protein is released. This sets off a second messenger to stimulate a neuron to send a signal. This is transmitted by olfactory nerve fibres which enter either of two specialized structures (olfactory bulbs), stemlike projections under the front part of the brain. They sort the signals, and transmit them to the brain for processing.

As this energy is in the infrared region, infrared absorption spectroscopy is a common tool for measuring vibrational energies and bond strengths (together with the complementary technique of Raman spectroscopy).

This means certain groups of atoms have similar energies, so have similar vibrational spectra. For example, chemicals with sulfur-hydrogen bonds tend to vibrate at about 2500 cm-1 and this is often perceived as a ‘rotten’ smell—rotten eggs produce chemicals like hydrogen sulfide (H2S), and ethyl mercaptan produced by rotting meat is C2H5SH.

Turin supports his theory by noting that decaborane (B10H14) smells very similar to S–H compounds, and it has nothing in common with them apart from similar vibrational energies. Although boron has a much lower atomic mass than sulfur, B–H bonds are much weaker than S–H bonds, and these effects happen to cancel out.

Further support was provided by the analogous compounds ferrocene and nickelocene. These have a divalent metal ion (iron and nickel respectively) sandwiched between two cyclopentadienyl anions (C5H5–). The main vibrational difference between them is that the metal ring bond in ferrocene vibrates at 478 cm-1, while in nickelocene it is 355 cm-1. Ferrocene smells rather spicy, while nickelocene smells like the aromatic hydrocarbon rings. Turin proposes that below a threshold of 400 cm-1, the vibrational signal is swamped by ‘background noise’, so is not detected by the nose.

As different isotopes have different masses but similar chemical properties, they affect the vibrational energy. It can be seen from the formula for reduced mass that the biggest difference results from replacing hydrogen (Ar = 1) with deuterium (Ar = 2)—the numerator is doubled. Indeed, deuterated acetophenone smells fruitier than ordinary acetophenone (C6H5COCH3). It also smells slightly of bitter almonds, just like many compounds containing the cyanide or nitrile group (C≡N)—both C–D and C≡N bonds vibrate at about 2200 cm-1.